The small building understands itself as landscape furniture and adopts corresponding structural characteristics. While the formal language is influenced by the principles of the material wood, the shape of the interior is based on the human body. In a very small space, aspects such as physicality, intimacy, visual references and lighting conditions play a major role and are expressed in this project in a space-creating way. In addition to the social aspect, the small, mobile building consciously addresses the relationship between space and time and, as nomadic architecture, the feeling of the archaic primeval hut. 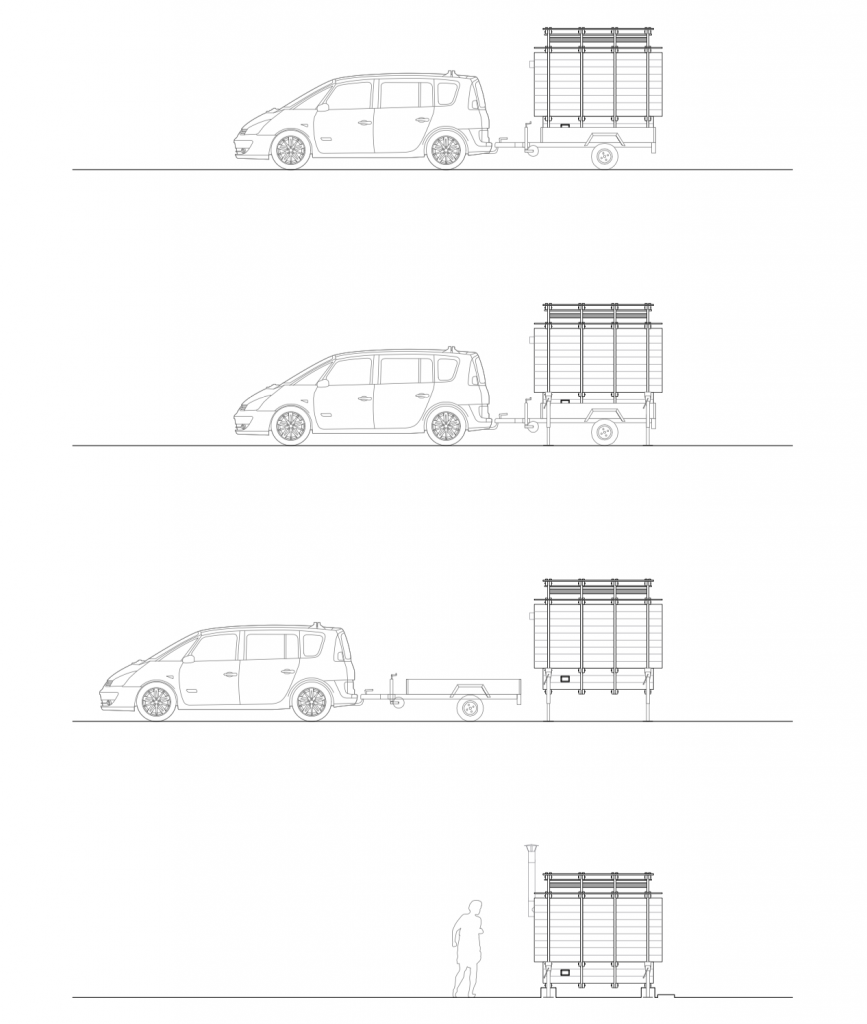 The „Schwitzhütte“ fits on a small, standard car trailer and can be transported to places that are difficult to access. After leaving the road, the arrival and locating follows. The relatively slow process of setting down has a decelerating effect and puts you in the mood for the upcoming sauna event. By setting the sauna down, it is uncoupled from the trailer and lowered using the attachable swivel outriggers. In this way, the furniture can be located, levelled and adapted to the respective topography and brought to a comfortable entrance height. 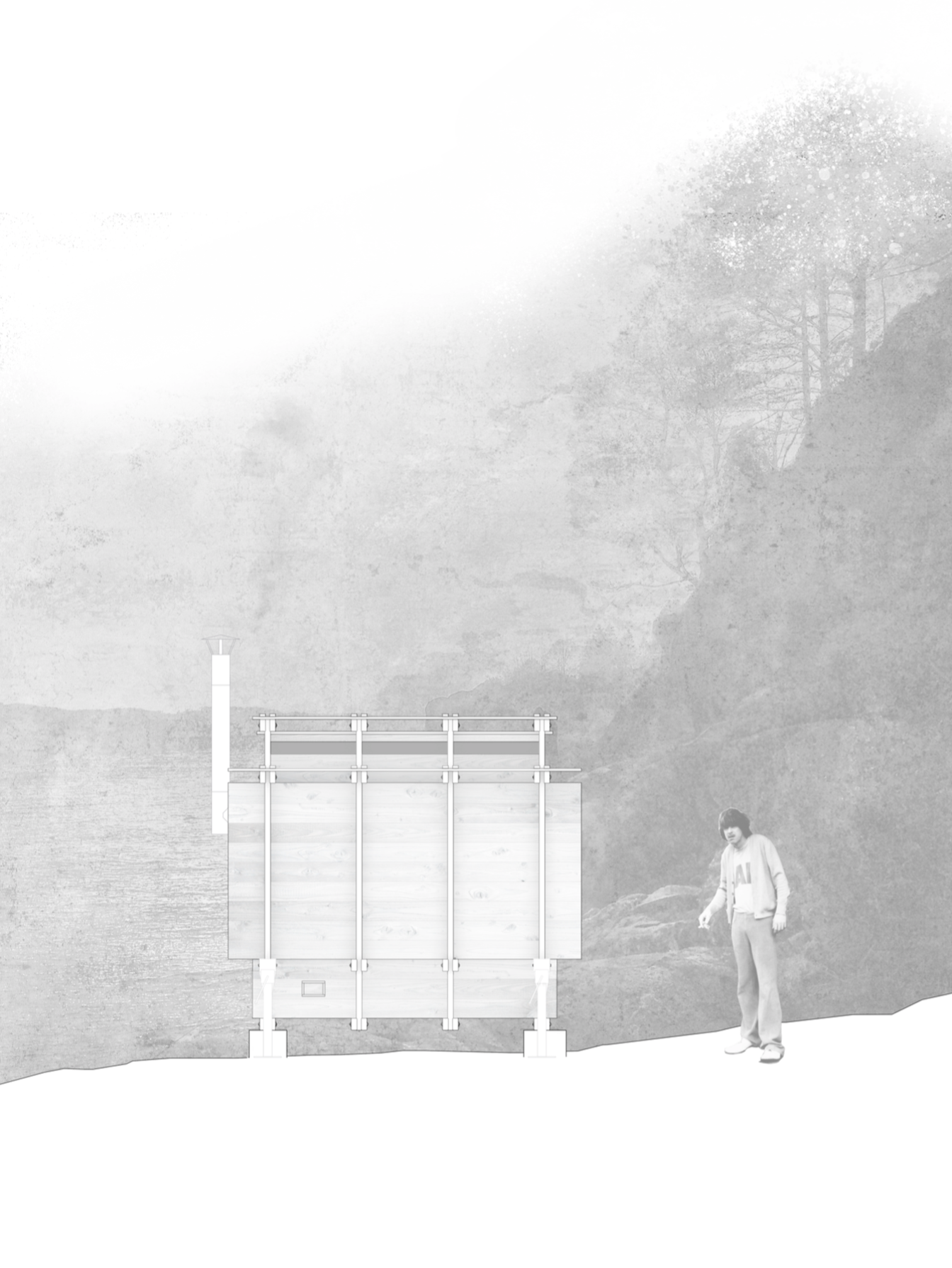 Through a low entrance door you enter the sauna room. This is formed by two bodies pushed into each other along the axes of movement. The upright body with skylights helps to straighten and orientate oneself when entering and leaving the building. The lying body increases the floor space limited by the trailer and forms the side benches. The resulting false ceiling and low lintel keep the warm air low inside. The floor plan is divided into three areas, one of them is for the stove and its accessories, the larger remaining area can host up to four people. 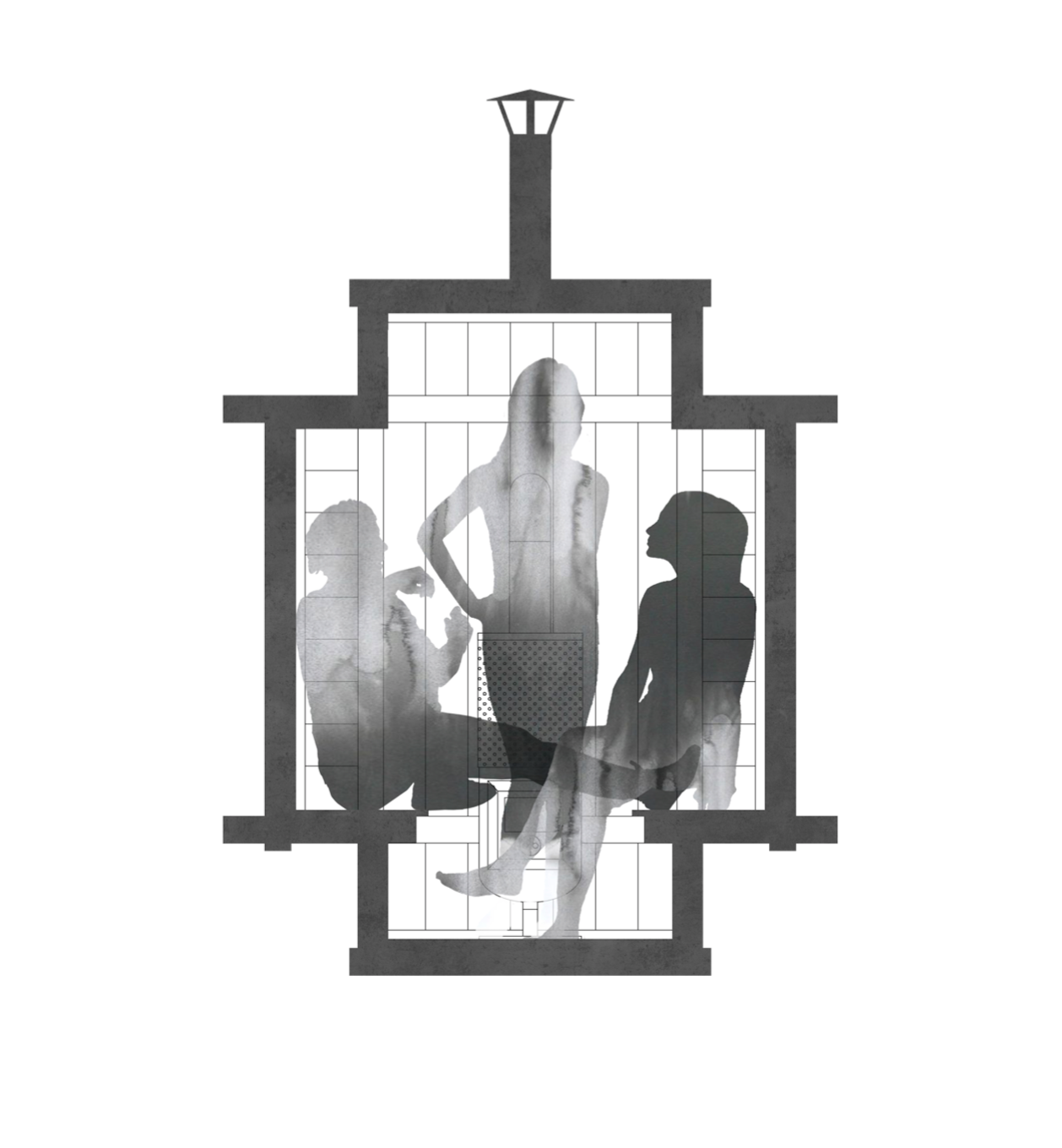 The main focus of this design is the handling of the building material wood, taking into account the material’s typical properties. There are no synthetic materials used – only wood, metal and glass. The intensive study of the material made it possible to develop a solid wood construction, which meets the requirements of a characteristic sauna, with optimal weight reduction. 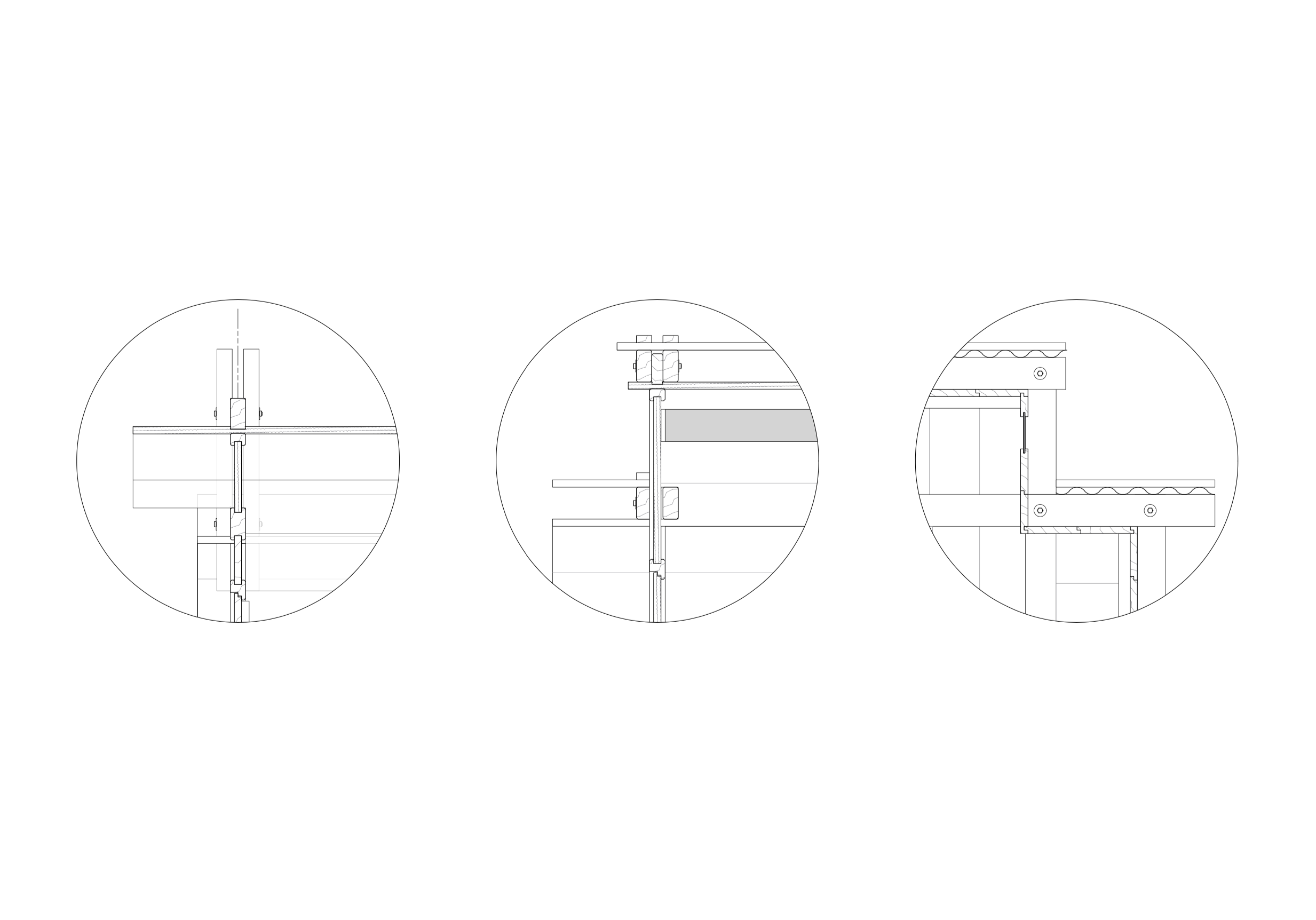 The main construction uses only two different solid wood diameters: the spruce square timber profile as the supporting skeleton of the structure and the relatively thin Douglas fir board, which forms the wall and thus the breathable skin of the room body. The complex processing of both profiles results in an interplay of an articulated tongs frame in which the wall boards, held by inserted burr strips, are integrated in a stabilizing manner. Once again, the standing plank profile, held in place by the inserted burr strip, takes on a supporting function and transfers the vertical loads to the two main supports. The relatively high shrinkage and swelling behaviour of the wood to be expected as a result of extreme fluctuations in humidity and temperature has been taken into account and is thus constructively compensated by the mobility of the boards along the ridge strip joint. A slotted hole connection on the ceiling clamp enables the false ceiling to be lowered through readjustment. This restores the joint tightness and stability of the overall construction if required. 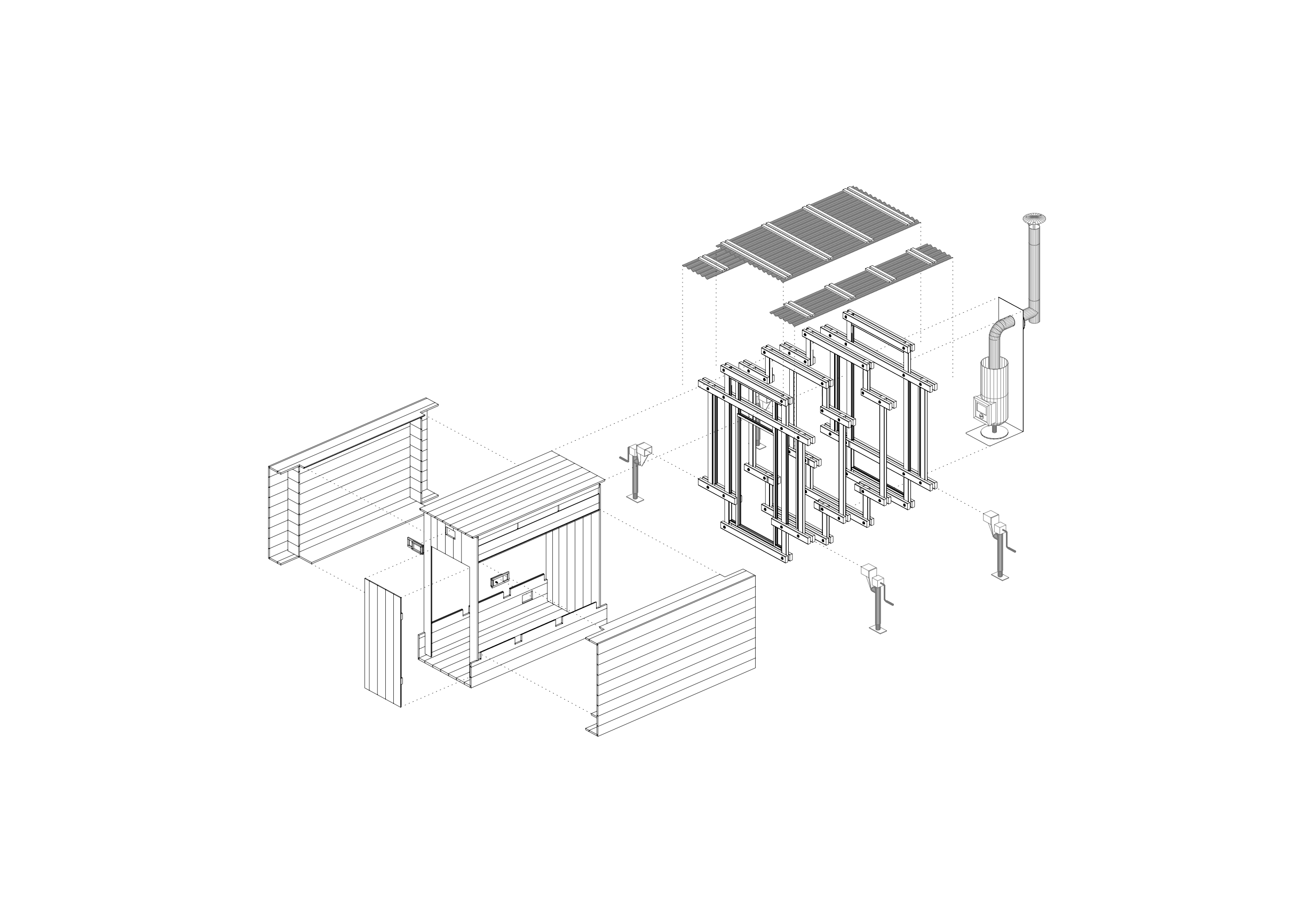 While the construction is kept undisguised and easy readable outside, the clear, tidy interior avoids any distraction. Apart from the stove, made from a recycled gas bottle, there are no metal parts inside. This would heat up considerably at the high room temperatures and lead to unpleasant burns on physical contact. 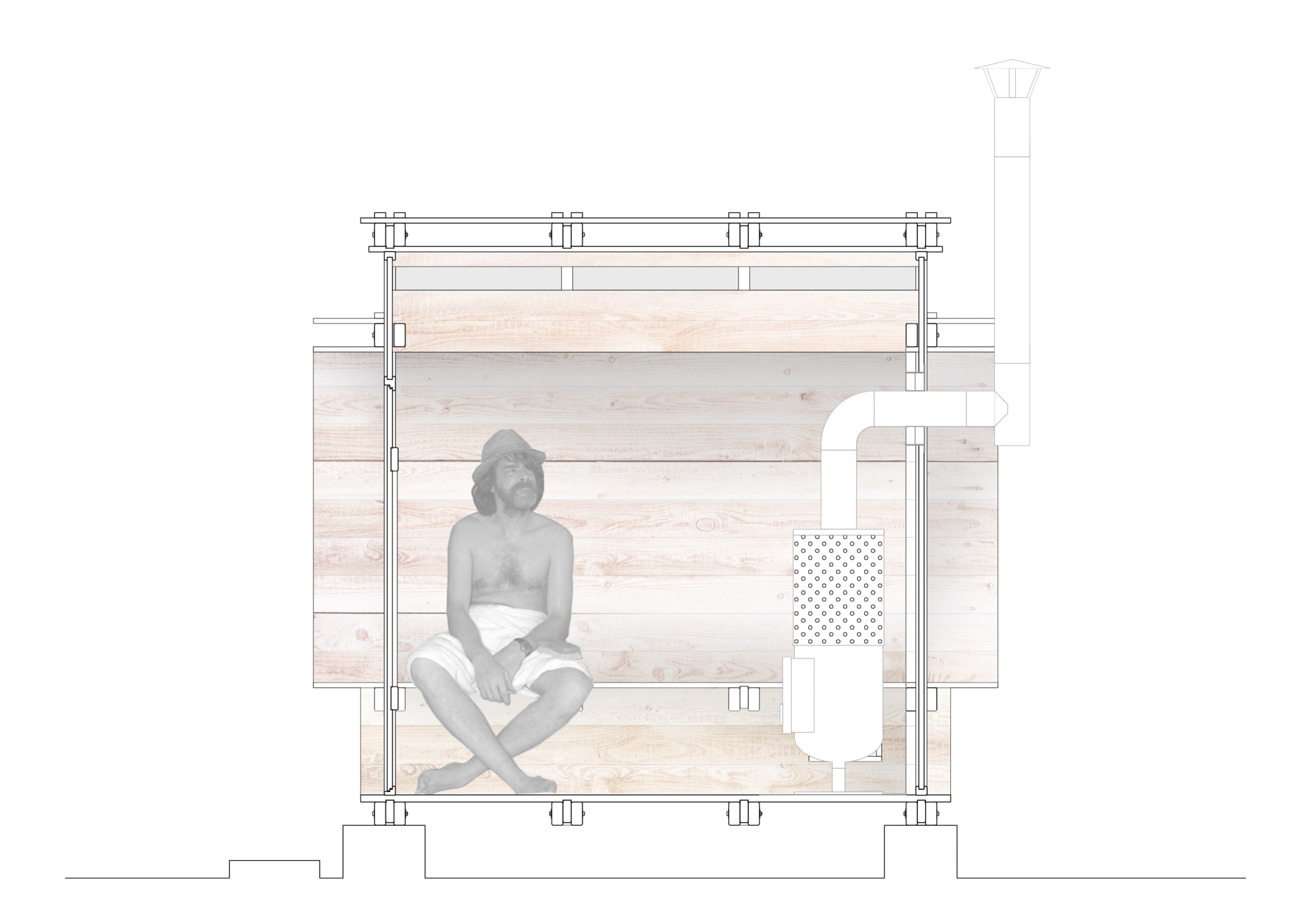 The boards are rough sawn and slightly grinded indoors, otherwise untreated. On the outside an old Japanese wood preservation method („Shou Sugi Ban“)is used to protect the horizontally arranged wall boards against rain and sun. The flame treatment of the surface, brushing off the charred wood components and the final oiling of the still warm boards ensures a durable and natural impregnation. The resulting black colouring additionally accentuates the contrast between interior and exterior.